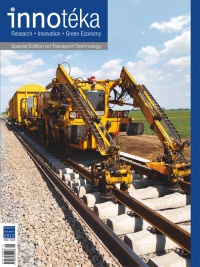 The Doyen of Railway Electrification in Hungary

Vasútvill Ltd. and its legal predecessors have built overhead lines along more than 2,000 km of railway operated by MÁV Co. and GYSEV Co. Headquartered in Kőbánya, a district of Budapest, the company has constructed around 97% of Hungary’s overhead (OH) network and participates in almost every substantial capital expenditure project. Given its current capacity, the company can build about 300 km of railway overhead lines per year in a system supporting the modern requirements of electric rail traction.


Vasútvill Ltd. (the legal successor of MÁV Overhead Construction Directorate, founded in 1949) is a company set up to build, refurbish and reconstruct the 25 kV AC 50 Hz single phase railway overhead systems that match the design speed of railways operated by MÁV Co. Accordingly, the core lines of business of the company include the design, construction, maintenance, refurbishment and reconstruction of overhead lines for railways. In addition to building overhead lines proper, they also construct and install various electric equipment and transformer units integrated into overhead systems. The latter comprises the deployment of pre-heating, point heating and auxiliary (emergency back-up) transformer stations and outdoor lighting equipment. Heroic Age and Change of Ownership
The incubation period of the sector, with 50-60 km of railway electrified each year, dates back to the sixties and lasted until the fall of communism in Hungary. In the early nineties, the cutback of MÁV’s development funds set back the electrification process and the construction of overhead lines. That is why the railway operator transformed the firm by establishing it as its 100 percent subsidiary employing 172 people and ensured its viability by commissioning it to reconstruct the Ferencváros Railway Passenger Station. Thereafter railway electrification systems were constructed through concessions subject to international tendering and Vasútvill was awarded construction contracts for three railway lines as a subcontractor of Siemens.
1998 was the next major milestone in the history of the company as MÁV sold 49% of its interest in it to new members including Győr–Sopron–Ebenfurti Vasút (GYSEV) Co. and Elektrizace železnic Praha a.s., the Czech electrification company. As state ownership was reason for elimination from projects tendered by the EU, MÁV sold its remaining quota and the Prague-based company acquired majority control.

Vasútvill’s Capabilities
In recent decades, Vasútvill has played a cardinal role in equipping the optical cables laid along the lines operated by MÁV and GYSEV. The company and its legal predecessors have built overhead lines along more than 2,000 km of railway operated by MÁV and GYSEV.
Given its current capacity, the company can annually build about 300 km of railway overhead lines in a system meeting the state of the art requirements of electric rail traction. The company has experience with constructing cross arm or cross bar overhead systems at stations. Constructing cost-saving overhead systems is also an option for reducing capital expenditure where speed requirements are lower. Naturally, the company owns a full array of technical equipment required for building overhead lines: proprietary trains for laying concrete, overhead line fitting vehicles, and railway cranes complemented by a large fleet of road vehicles.
The head office of the company is located at 90 Jászberényi Street, Budapest and accommodates both financial and engineering management. The central premises feature a workshop specialised in providing services to external construction sites and in manufacturing, as well as material storage facilities and a PPM unit to support vehicle operation.
Since 1999, the company has also been engaged in operating and maintaining existing networks of overhead lines. Vasútvill had employed 180-240 people before 2005. When MÁV outsourced railway line maintenance activities in the eastern and western parts of Hungary, the railway operator transferred hundreds of employees to the company. Headcount rose to 625 in 2005 with sales income reaching HUF 7.2 billion. Accordingly, 26 new sites were dedicated to maintenance in those years. The company was responsible for maintaining overhead lines installed along 4,967 km. For a period of six years, the company engaged in the electrification of new and in the reconstruction of existing overhead lines, focusing primarily on reconstruction and rehabilitation jobs. The Great Comeback
After a period of ten years, a new electrified railway section was constructed as part of the network operated by MÁV in Hungary. The electrified railway line between Bajánsenye (Hungarian border) and Boba was commissioned for traffic on 20 August 2010. Vasútvill took the front stage in construction.
The new 100 km section crosses three counties (Vas, Zala, Veszprém). It forms part of the Pan-European Railway Corridor V along the route from Venice to Moscow via Triest, Ljubljana, Budapest, Uzhgorod and Lviv, as well as of the rehabilitation of the Zalalövő–Boba section, a project supported by the European Community.
The tracks have been reconstructed along the full length of the section and the layout of the stations has also been updated. The Boba railway connection supports train traffic to Budapest without reversal and the whole line is equipped with electronic block installations. This outstanding development in railway history used 2,280 pylons for overhead lines, 3,750 metres of supporting bars, 170 km of catenary, 146 km of feed and bypass wire, and 119 section switches. The 1 × 25 kV AC 50 Hz system supports 160 km/h speed along open lines and the straight main lines of stations and 40 km/h along station sidetracks.
A section of overhead lines constructed as part of the Boba–Jánosháza connection allows speed of 230 km/h due to the Siemens AG system’s design that ensures superior current collection parameters as well as a more economical construction.
Vasútvill has participated in countless railway reconstruction works lately. Projects that are more recent include the Tárnok–Székesfehérvár and the Szajol–Püspökladány lines. The company has also been involved in the construction of overhead systems for the Balatonszentgyörgy–Nagykanizsa–Murakeresztúr, the Rákospalota–Újpest–Vácrátót and the Székesfehérvár–Szombathely sections. Reconstruction jobs have been fulfilled primarily related to the Cegléd–Kecske­mét, Városföld–Kiskunfélegyháza and Cegléd–Abony–Szolnok lines, whilst the Fertőszentmiklós–Neusiedler am See line is significant as a cross-border project where the company acted as main contractor in the electrification of a 60 km section. Opening Up for Community Transport
Although established specifically for the purpose of constructing overhead lines for railway application, the company has not limited its availability to jobs involving 24 kV AC 50 Hz single phase OH lines. Vasútvill is also active in the suburban railway traffic and has excellent references: it has electrified the section of Tram Line 1 between Bécsi Street and Kerepesi Street in Budapest; it has refurbished the Grand Boulevard section of Tram Lines 4 and 6 in Budapest and a smaller section of the Great Forest Tram Line in Debrecen; and played a role in constructing the overhead system of Tram Line 2 in Szeged. Earlier on, the company’s projects included the construction of the suburban rail line between Tököl and Ráckeve. Now they are ready to accept orders for constructing, refurbishing and maintaining overhead lines in other settlements too. The majority owner of the company, Elektrizace železnic Praha has been active for a long time in the similar segments of the Slovak and Czech markets. The company played a key role in the development of urban community transport in Budapest between 1978 and 1992 and would like to proceed with this.
Moreover, big challenges await the company in the railway line business too, with the next project involving the re­construction of a section between Szajol and Püspökladány, which is to be complet­ed in two phases. This is due to end in late 2013 and the Tárnok–Kelenföld project should be ready by late 2012. In addition, as part of an international transport corridor, development may continue along the railway section connecting Lőkösháza with the Mezőtúr–Gyoma section (the reconstruction of which ended in 2009). The company is expecting an assignment covering the Gyoma–Békés­csaba section and the reconstruction of the Békéscsaba Railway Station too.•

The set up of rail transport in Hungary in 1846 represents a milestone in the economy of the nation. The railway network...

In the past two years, altogether 7,000 new jobs have been created and 15,000 have been retained by utilising the resources...

Across the Border into Hungary

With global competition intensifying, getting investors to vote in favour of Hungary requires more and more efforts, said...

“KÖMI Ltd. provides engineering consulting services in the area of transport, as part of which we have participated in...

The development of Hungarian railway lines belonging to the European core network is steaming ahead. Ring Mérnöki Iroda...

It was almost five years ago, in 2007 that Miklós Kósa, relying on 25 years of experience in railway construction and the...

A Chance to Revive Railway Manufacturing in Hungary

“Once a railway man, always a railway man”, says János Csárádi, former CEO of MÁV, who claims that the training of...

Driven by Professionalism and Commitment

Bi-Logik Ltd. was set up on 28 May 2002 with 7 employees. Headcount has since increased to 13. The company designs rail telecommunications...

Innovation for Your Safety

Műszer Automatika Ltd. is a private enterprise with the most complex activity involving development, manufacturing, implementing...

Opening toward the East

R-Traffic Ltd., a company held by Hungarian owners, has been active in the development of Hungarian transport for more than...

With superstructure diagnostics of Hungarian railways as its core business, MÁV Central Rail and Track Inspection Ltd. is...

Not unlike earlier on, the outdoor use of wooden materials enjoys great popularity nowadays. The reasons are countless: from...

“My father, József Gaál, founder of G&G Plant Protection and Trading Ltd. was the first to provide plant protection services...

Cluster for the Revival of the Hungarian Railways

“We wish to put the internationally acclaimed knowledge of our companies regarding the railway and vehicle sectors to good...

Is there anyone out there who has not been lured at least once by the smoke of a locomotive? Buying a ticket to ride vintage...
További cikkek
Partnereink